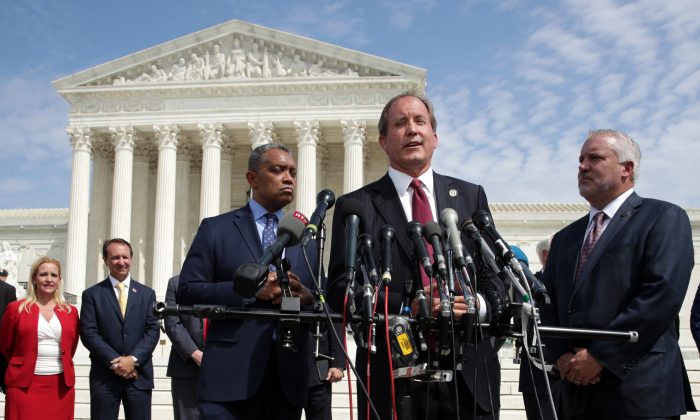 Fifty U.S. States and territories, including the District of Columbia and Puerto Rico, have launched an anti-trust probe into Google and the company’s “potential monopolistic behavior.” The investigation is being led by Texas Attorney General Ken Paxton, who formally made the announcement on Sept. 9.

The bipartisan probe from attorneys general included nearly every state in the nation, except for California and Alabama. President Donald Trump has increasingly called out Google and other technology companies for suppressing conservative voices. In August, Trump said on Twitter that his administration is “watching Google very closely.”

The new probe follows existing investigations at the federal level by the Justice Department and the Federal Trade Commission, which are currently probing Facebook, Google, Apple, and Amazon for potential violations of antitrust law.

Nebraska Attorney General Doug Peterson said at a Washington press conference that the sheer number of attorneys general joining together sends a “strong message to Google.” A Google spokesperson didn’t immediately respond to a request for comment by The Epoch Times on the new probe.

According to a press release, the investigation will focus on Google’s “dominance in the telecommunications and search engine industries” as well as the “potential harm” the company may cause to consumers and the economy from any anti-competitive conduct. Google’s parent company, Alphabet, has a market value of more than $820 billion and controls many facets of the internet. Google’s dominance in online search and advertising enables it to target millions of consumers for their personal data.

Paxton said at a press conference that the states formally requested, on Sept. 9, documents from Google on its advertising business. Several of the attorneys general at the announcement in Washington described the investigation as “preliminary” but said they expected it would expand to cover other issues, including data privacy.

Alphabet said Sept. 6 that the Justice Department in late August requested information and documents related to prior antitrust probes of the company. The company added in a securities filing that it expects similar investigative demands from state attorneys general and that it is cooperating with regulators.

“Google’s control over nearly every aspect of our lives has placed the company at the center of our digital economy,” she wrote. “But it doesn’t take a search engine to understand that unchecked corporate power shouldn’t eclipse consumers’ rights.”

Dr. Robert Epstein, a senior research psychologist at the American Institute for Behavioral Research and Technology, told The Epoch Times the new probe is “quite important” because the United States has done very little to keep companies like Google in check. Epstein has spent more than half a decade monitoring Google’s influence.

“A single lone state trying to fight Google is a great waste of time,” Epstein said. “When you have so many states fighting, that’s a significant action. There are nearly 800 attorneys just in the attorney general’s office in the state of Texas. We are talking about a lot of resources now being brought together going up against Google.”

Epstein said he had been in regular touch with some of the attorneys general, in some cases going back several years.

“The main thing they can do is to levy fines, and the problem is Google can just brush off fines,” he said. “Google has been subjected to more than $8 billion in fines by the EU in the last two years, approximately. But I don’t think these fines will really have the impact that we need to have on Google.”

According to Epstein, Google’s power needs to be curtailed in three main areas: surveillance, censorship, and manipulation. Epstein said he has spoken to various attorneys general about these issues, but he wasn’t sure if they had the authority. He said said Congress, the Justice Department, and the Federal Trade Commission could take much more concrete action.

Epstein said that even if Democrats swept the 2020 election—which he believed would end the federal investigations—the attorneys general probe would almost certainly persist. He said this was why the new probe is so important.

In 2016, Epstein conducted a secret monitoring project that showed that Google hid negative auto-complete search results for Hillary Clinton months before the presidential election. His peer-reviewed research found Google’s algorithms can easily shift 20 percent or more votes among voters and up to 80 percent in some demographic groups.

Epstein, who considers himself a moderate who leans liberal, warned that if Congress becomes controlled by Democrats, “Google’s power in Washington will skyrocket.”

Reuters and The Associated Press contributed to this report.