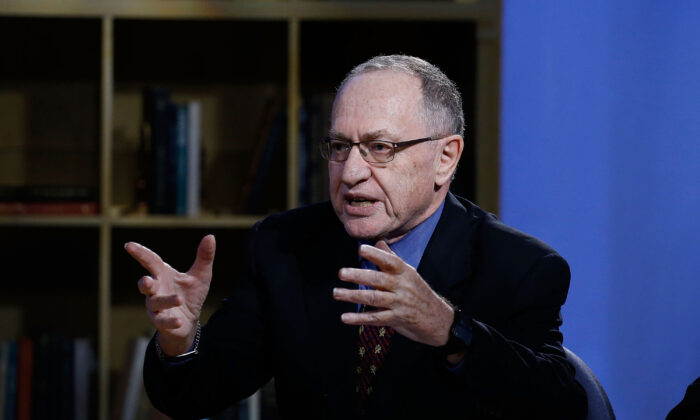 Harvard law professor and attorney Alan Dershowitz said that he does not plan to accept any payments for work on President Donald Trump’s impeachment defense team.

During an interview on CNN’s Anderson Cooper 360, Dershowitz said he was joining the defense team because he strongly believes in the Constitution and opposes the impeachment. He added that he was concerned about the “weaponization of impeachment” and that this could be used as precedent in other cases.

The law professor said that discussions about payment have not yet occurred but added that if payment is made, “all the money would go to charity.”

Dershowitz is among the eight counsels confirmed to join Trump’s legal team for the upcoming Senate impeachment trial. The defense team will be led by White House counsel Pat Cipollone and Trump’s private attorney Jay Sekulow, according to the White House.

Also joining the legal team are Ken Starr, a former U.S. solicitor general; Trump adviser and former Florida attorney general Pam Bondi; former independent counsel Robert Ray who was part of the Whitewater investigation of the Clintons; Jane Raskin, one of Trump’s private lawyers who was part of the president’s legal team during Mueller’s investigation; and former independent counsel Eric Herschmann of the Kasowitz Benson Torres legal firm, which has represented Trump in numerous cases over the last 15 years.

Dershowitz said he had been asked to argue about the constitutional criteria for impeachment—something he has written about extensively—and explain why the allegations against the president do not rise to the level of an impeachment offense.

“I will go into the history of the formulation in the Constitution and the history of how these words came to be, and leave it to others to argue the facts, to make strategic decisions about witnesses,” he said.

In a statement on Friday, Dershowitz’s team said the professor is a non-partisan member of the team. They said he opposed the impeachment of President Bill Clinton and voted for Hillary Clinton.

His participation is based on his passion to “defend the integrity of the Constitution and to prevent the creation of a dangerous constitutional precedent,” the statement said.

The House approved two articles of impeachment against the president last month, which were delivered to the Senate on Wednesday evening. The two articles alleged Trump abused his power and obstructed Congress in his dealings with Ukraine. The House also revealed the list of managers who will present the chamber’s case for impeaching the president to the Senate. House Intelligence Chairman Adam Schiff (D-Calif.) and House Judiciary Chairman Jerrold Nadler (D-N.Y.) are among the people who will argue the House’s case.

The trial in the upper chamber formally began on Thursday, when senators were sworn in as jurors by Chief Justice John Roberts. The trial will resume on Tuesday with opening statements.

“The president looks forward to the end of this partisan and unconstitutional impeachment. It’s time for Congress to turn its attention back to the work of the American people and leave sham political investigations like this one in the past,” she said.

Dershowitz has been a well-known figure in U.S. legal circles for decades. As a criminal lawyer, he was part of a team of lawyers who worked on former NFL player O.J. Simpson’s murder defense in the 1990s. Dershowitz has also represented former heavyweight boxing champion Mike Tyson; Hearst publishing heir Patty Hearst who was kidnapped in 1974 by a Marxist terrorist group; and televangelist Jim Bakker.

Reuters and The Associated Press contributed to this report.