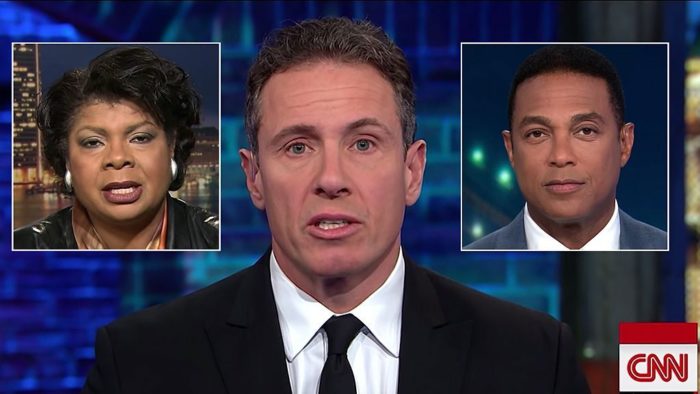 It’s been another rough week for CNN as the network suddenly has a plethora of off-screen issues in addition to its usual ratings struggles.

“Just when one thought things couldn’t get any worse for CNN, they did,” NewsBusters managing editor Curtis Houck told Fox News.

“In CNN’s current form, they’ve always had putrid ratings, disingenuous personalities and a pathetic inability to simply cover the news – instead fearmongering the small, anti-Trump audience into submission – but this past week was possibly the worst ever in totality.”

The liberal news network started off the week making headlines for the wrong reasons. “CNN Tonight” host Don Lemon was accused in a civil suit of a sexually charged assault of a bartender in New York’s posh Hamptons area last year. The same evening that the Lemon news broke, on Tuesday, video circulated of CNN political analyst April Ryan looking on while a local news editor appeared to be violently removed from an event where she was a keynote speaker.

The Lemon and Ryan headlines came less than 24 hours after video of “Cuomo Prime Time” namesake Chris Cuomo threatening a man who called him “Fredo” went viral, capturing the attention of President Trump in the process.

“This was not a good week to be CNN. In addition to its abysmal ratings, three of its top news personalities are embroiled in scandal and controversy.”— William A. Jacobson

“This was not a good week to be CNN. In addition to its abysmal ratings, three of its top news personalities are embroiled in scandal and controversy,” Cornell University Law School professor and media critic William A. Jacobson told Fox News.

“In a rational world, CNN leadership would implement a dramatic course correction, but there is no sign that rationality prevails at CNN,” he said.

While CNN defended Cuomo, the president had a different take on the profanity-filled rant.

“I think what Chris Cuomo did was horrible. His language was horrible, he looked like a total out-of-control animal. He lost it,” Trump told reporters. “Chris Cuomo is out of control. I watched it, I thought it was terrible… you’ve never seen me do that.”

CNN’S APRIL RYAN AFTER BODYGUARD EJECTS LOCAL JOURNALIST: ‘WHEN I SPEAK, I DON’T HAVE NEWS COVERING MY SPEECH’

The CNN host is the younger brother of Andrew Cuomo, the Democratic governor of New York. But Cuomo’s outburst over being referred to as “Fredo,” a reference to Fredo Corleone, the weak and facile brother in the movie “The Godfather,” has been labeled hypocritical because several CNN personalities have used the exact reference to mock President Trump’s children.

THAT’S THE POINT with Brandon@THEECONSTITUTI1

CNN’s public relations team called the remark “an ethnic slur” and Cuomo compared it to “the N-word” for Italians. But CNN and the “Cuomo Prime Time” host didn’t seem to think the word was some sort of vile smear in the past.

The New York Post unearthed an old video in which Cuomo playfully referred to himself as “Fredo” during a 2010 radio interview and CNN’s Ana Navarro used the moniker to belittle Donald Trump Jr. earlier this year on Cuomo’s very own show. Cuomo didn’t reprimand Navarro for using the term that he now feels is equivalent to “the N-word.” CNN anchor Jake Tapper has also used the term, while CNN legal analyst Paul Callan used it in an op-ed earlier this year.

.@ananavarro slams Don Jr. for likening border wall to zoo fence: He’s an “entitled, rich, spoiled little brat whose only call to fame is being his daddy’s son.”
“[D]addy kept Fredo back home…Who cares what [he] says. I don’t want to talk about that entitled little brat.”15K10:43 PM – Jan 9, 2019

In fact, CNN pundits and guests have used the term “Fredo” so much that the Washington Free Beacon put together a montage of various times it was uttered on the liberal news network.

DePauw University professor and media critic Jeffrey McCall told Fox News that these latest controversies “surely complicate the overall image of CNN” amid a ratings crisis. CNN has struggled to attract viewers during the Trump administration and recently finished July as the No. 13 network on basic cable, averaging only 797,000 primetime viewers and shedding 11 percent of its audience compared to July 2018.

CNN’s most-watched program during July was “Cuomo Prime Time,” which finished No. 24 overall among cable news, behind 14 different Fox News shows and nine programs on MSNBC. It remains to be seen if the negative press will push CNN’s viewership further down the gutter, but McCall certainly doesn’t think it will help.

“News organizations never want to be the subject of news and CNN has allowed itself to become just that. No news outlet is immune from occasional bad publicity in this day and age, but some of CNN’s latest difficulties were avoidable,” McCall said. “Odds are that loyal CNN viewers will not depart because of the negative reports coming out about high profile CNN personalities, but this kind of negative publicity likely scares away less devoted viewers or potential viewers.”

Houck added CNN’s troubled week “started with Jake Tapper allowing Beto O’Rourke to say without pushback that tens of millions who voted for Donald Trump are racist and arguably condone white supremacy” on Sunday before the Cuomo, Lemon and Ryan stories unfolded.

“It was quite embarrassing,” Houck said.

Lemon denied the allegations against him and Cuomo said he should have been “better than the guys baiting me.”

CNN has not responded to requests for comment on the Ryan video.

Fox News’ Liam Quinn and Joseph A. Wulfsohn contributed to this report. Brian Flood covers the media for Fox News.