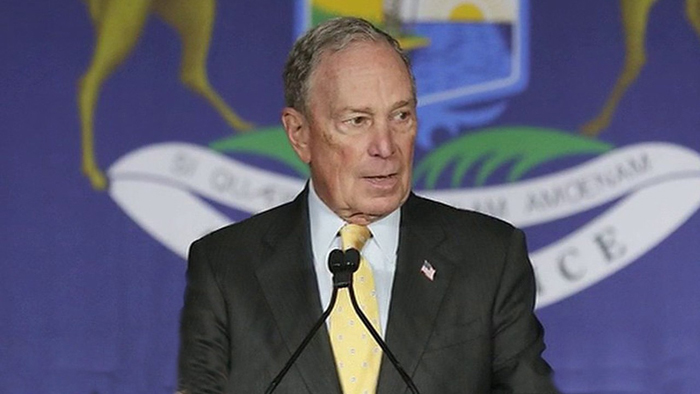 By Joseph A. Wulfsohn | Fox News

A CNN reporter who claims to be “unraveling conflicts of interests” may be finding herself in a conflict of interest of her own.

Cristina Alesci, CNN’s politics and business correspondent, was slammed on Tuesday for what critics accused her of “dismissing” the damning resurfaced audio clip of former New York City Mayor Michael Bloomberg defending his controversial stop-and-frisk policy by taking aim at the source who shared the remarks.

“Here’s the thing … important context here: We don’t have the full tape,” Alesci began. “So this is obviously snippets that have been released. The podcaster and the writer that released this sound is clearly a Bernie supporter. If you look at his Twitter feed, he’s very anti-Bloomberg. He’s been promoting the hashtag ‘#BloombergIsARacist.’ We don’t know how he got the sound to begin with. So lots of questions are being asked, especially on the timing of this. … A poll yesterday shows Bloomberg rising in the polls, in particular strong support in the African American community. He polled at 22 percent, just behind Joe Biden at 27 percent. So the timing here and the mission here are all calling into question –“

“But we also know that Bloomberg is going to be faced with continued questions about the stop-and-frisk policy,” CNN anchor Kate Bolduan said.

“That is correct,” Alesci responded.

However, CNN never disclosed on-air that Alesci used to work for the presidential candidate that she has been covering for months.

Before joining CNN in 2014, Alesci was a journalist at Bloomberg Television for over five years “where her coverage of high-profile deals made headlines and moved markets.” She also contributed to Bloomberg Markets Magazine, according to her CNN profile.

“I don’t see how it could hurt CNN’s reports, or a segment like this, to say, ‘Full disclosure, you used to work for Bloomberg,’ especially considering the issue of conflicts of interest have come up with regard to his candidacy several times already this cycle,” Mediaite columnist Caleb Howe told Fox News, referring to the controversial Bloomberg News editorial memo laying out how it would cover its own CEO as well as his Democratic rivals.

In her Twitter bio, Alesci says as a CNN journalist she is “unraveling complex connections, conflicts of interest and government ethics.”

But this isn’t the first time Alesci has been on air covering Bloomberg. Back in November, before he formally launched his presidential bid, Alesci reported on Bloomberg’s purchase of $29 million in television ads. And in January, she covered remarks Bloomberg gave appealing to black voters around the Martin Luther King Jr. holiday. Since her first reporting on the stop-and-frisk audio on Tuesday morning, she has been on air with developments to the controversy.

MSNBC’S JOY REID PROPS UP BLOOMBERG, SAYS DEMS NEED CANDIDATE TO ‘FIGHT LIKE A REPUBLICAN’ AND HE ‘USED TO BE’ ONE

Tom Elliott, founder and news editor of the media company Grabien, argued that CNN should be more transparent if it was going to try to tell viewers that the Bloomberg controversy is “not a story.”

“Measured against CNN’s standards for Trump, this Bloomberg audio is a blockbuster. But if CNN wants to tell their viewers it’s actually not a story because the guy surfacing it is a Bernie backer, they should probably go ahead and disclose that their reporter making this argument is herself tied to Bloomberg … at least if viewers are supposed to take their credibility seriously,” Elliott told Fox News.

Alesci’s reporting on Bloomberg’s remarks was slammed on social media for how she framed Benjamin Dixon, the podcaster who shared the clip, as an “anti-Bloomberg” Sanders supporter.

“In a VILE display of defending @MikeBloomberg’s racism, @CNN responds to audio unearthed by @BenjaminPDixon that shows Bloomberg saying you stop crime by frisking minorities by… Attacking Dixon as a Bernie supporter, questioning how he got the audio — and what his motives are,” Status Coup reporter Jordan Chariton reacted.

Dixon himself offered a poignant response to CNN.

“Hey @CNN if you want to dismiss this because I support senator sanders, you could always pick up the phone and hear from the [horse’s] mouth,” Dixon told the network.

Other Twitter users pointed out Alesci’s apparent hypocrisy that was on display.

Does anybody find it weird that @CristinaAlesci accuses @BenjaminPDixon of bias when Christina spent YEARS accepting checks from Mike Bloomberg? How can she be trusted as an impartial arbiter? Doesn’t @CNN  have an obligation to disclose this conflict to the audience?” Emily Cohen asked, including a video clip of Alesci’s reporting from Bloomberg Television.

While Howe doesn’t go as far as some of CNN’s fiercest critics as to whether Alesci was trying to “spin” the audio clip in defense of her former boss, the Mediaite editor doesn’t let her or her network off the hook either.

“[It’s] hard to say what the intent was, but without the disclosure, and with the overt jabs questioning the motives of podcaster Dixon, they can’t possibly be clueless why people SEE it as spin,” Howe said.

CNN did not immediately respond to Fox News’ request for comment.Joseph A. Wulfsohn is a media reporter for Fox News.