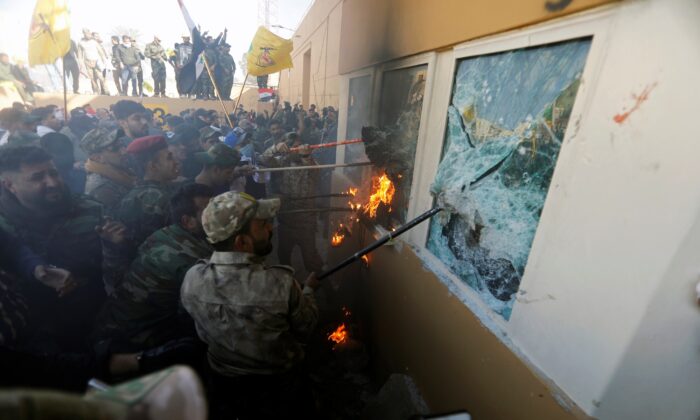 The Department of Defense said it was sending additional forces to support American personnel at the U.S. Embassy in Baghdad, Iraq.

The embassy was stormed by protesters on Dec. 31 who burned the outer wall and threatened the lives of Americans inside.

Iraqi security forces kept the protesters at bay but some personnel appeared to join in the mayhem as the crowd scrawled slogans on walls, hurled stones at buildings, and chanted “death to America.”

“The Department of Defense is working closely with the Department of State to ensure the security of our embassy and personnel in Baghdad. As in all countries, we rely on host nation forces to assist in the protection of our personnel in-country, and we call on the government of Iraq to fulfill its international responsibilities to do so. The U.S. continues to support the Iraqi people and a free, sovereign, and prosperous Iraq,” Secretary of Defense Mark Esper said in a statement.

“We have taken appropriate force protection actions to ensure the safety of American citizens, military personnel, and diplomats in-country, and to ensure our right of self-defense. We are sending additional forces to support our personnel at the embassy,” Esper said.

The forces were Marines, U.S. officials told Reuters, speaking on condition of anonymity. The numbers would be in the dozens, they said. Another official said two Apache helicopters flew over the embassy in a “show of force.”

The U.S. ambassador to Iraq and some staff members were evacuated from the compound, but others remained in the building. Protesters were angry Americans conducted military strikes against the Iranian-backed terror group, Kaitaib Hezbollah, after the group killed an American civilian contractor.

“Iran killed an American contractor, wounding many. We strongly responded, and always will. Now Iran is orchestrating an attack on the U.S. Embassy in Iraq. They will be held fully responsible. In addition, we expect Iraq to use its forces to protect the Embassy, and so notified!” President Donald Trump said in a statement earlier Tuesday.

“To those many millions of people in Iraq who want freedom and who don’t want to be dominated and controlled by Iran, this is your time!” Trump wrote in another missive.

Secretary of State Mike Pompeo spoke with Iraqi Prime Minister Adil Abdul-Mahdi and President Barham Salih by phone and “made clear the United States will protect and defend its people, who are there to support a sovereign and independent Iraq,” according to spokeswoman Morgan Ortagus.

Iraqi leaders assured Pompeo that they would guarantee the safety of American personnel and property.

But a day prior, leaders there condemned the U.S. air strikes on the Iran-backed forces.

“The prime minister described the American attack on the Iraqi armed forces as an unacceptable vicious assault that will have dangerous consequences,” Abdul-Mahdi’s office said.

Iraq’s Foreign Ministry said it was going to summon the U.S. ambassador in Baghdad to voice Baghdad’s disapproval.

Pompeo said in a call with António Guterres, the secretary-general of the United Nations, that the strikes “were aimed at deterring Iran.”