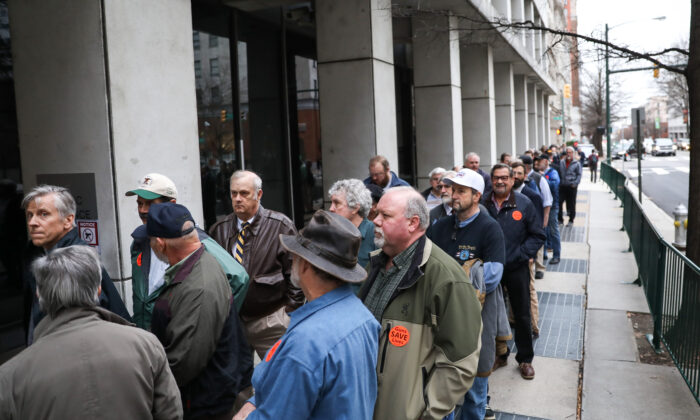 RICHMOND, Va.—Hundreds of Second Amendment advocates converged on Virginia’s state capital on Jan. 13 to oppose a slew of tighter gun control proposals being voted on by newly elected state lawmakers.

The long line of Virginia residents—many wearing bright “Guns Save Lives” stickers—showed up before 8 a.m. in a show of support for their constitutional rights that they say are being infringed upon. Some gun control advocates attended as well, holding signs with slogans such as “sensible gun laws equal less gun violence.”

The rallying crowds did little to stop four gun control measures from advancing in the state’s Democratic-led General Assembly after approval by the Senate Judiciary Committee. The committee passed legislation for universal background checks, a measure allowing localities to ban weapons from some events and government buildings, a “red flag” bill allowing authorities to temporarily confiscate guns from certain individuals deemed a risk, and a law that limits the purchase of handguns to only one per month.

NOW: I’m at Virginia state Capitol where lawmakers are expected to vote on a number of proposed gun control bills. Many gun advocates are showing up to protest against them. pic.twitter.com/XuAtxreeOQ

In interviews with The Epoch Times, Second Amendment advocates, including local residents, county sheriffs, gun store owners, and Virginia’s NRA leader, argued that the proposed gun control measures were an overreach that violated residents’ constitutional rights. They said stricter legislation will do nothing to stop criminals from committing crimes and said the focus should be more on mental health.

The four bills now advance to the Virginia Senate for further discussion. They would need to be passed by the Senate and the House of Delegates, and be signed by Gov. Ralph Northam (D) to become law.

Democrats won control of both chambers of the state legislature in the November 2019 elections and have vowed to enact stronger gun control policies. They believe stricter legislation will help reduce shootings and deaths and would “break the cycle” of gun violence.

The committee ended up largely voting along party lines, but not every piece of legislation was approved. One proposed measure (SB-16) that sparked the most controversy—banning the sale and possession of so-called assault weapons—was taken off the table. According to The Associated Press, an estimated 8 million AR-style guns have been sold since their introduction to the public in the 1960s.

Matthew Thwing, a 41-year-old small-business owner in Virginia, said he attended the hearing to have his voice heard and to show that he and the other “nearly 1,000” Second Amendment advocates weren’t going to stand for the new agenda pushed by state lawmakers. An additional overflow room had to be opened during the hearing because of the large numbers.

“It’s woken a sleeping giant, if you will,” Thwing added. Some of the Second Amendment supporters took the day off work to attend, while others drove from hours away.

The number of Second Amendment supporters who showed up wasn’t surprising, Matt Rogers, chief of staff to Sen. David W. Marsden (D-Fairfax), said before the hearing. Marsden represents the 37th District in the state Senate.

“There are people here on this side, and on that side,” Rogers told The Epoch Times. “I’m absolutely not surprised, its a democracy. It’s not a problem, and it’s actually exciting, even if people don’t tend to agree with our point of view … this is the right way to address their grievances.”

Rogers said they have to “be mindful” of the Second Amendment, but he added that there are things that can be done “within the bounds” of it.

Daniel Spiker, state director at the National Rifle Association (NRA), expressed disappointment following the results of the committee hearing. He predicted the fight for Second Amendment rights will be a very long and drawn-out one.

“SB-16 being stricken from the record is an indication that the governor and some of the Democrats have seen that they’ve overreached and that these bills have unintended consequences,” he told The Epoch Times.

“We’re encouraged by it. But at the end of the day, it’s still multiple levels of new regulation and new laws imposed on law-abiding citizens,” he said.

State lawmakers have less than 60 days to get all the bills to become law. Spiker said that the result of the NRA’s rallying call for citizens to flock to the state capitol “far exceeded their expectations of what the turnout was going to be.”

“It’s indicative of what this movement is and the enthusiasm we’re seeing at the local level with engaging their board of supervisors, their city councils,” Spiker said. “Our hope was for that enthusiasm to come to Richmond.”

On Jan. 7, the city council in Virginia Beach enacted legislation in a 6 to 4 vote to declare the state’s largest city a “Second Amendment constitutional city.” In that vote, local residents crowded the building to have their voices heard, with an overflow crowd outside watching the proceedings on a TV screen.

Officials who have adopted such sanctuary resolutions or amendments generally state that they won’t follow new gun laws they believe are unconstitutional. Local officials who voted for their counties to become Second Amendment sanctuaries told The Epoch Times the measures they passed were largely symbolic and were made to send a message to lawmakers. They said that any state laws enacted would still supersede any local legislation.

Following the Senate committee hearing, a county sheriff said he wasn’t surprised by the committee’s action, and that he was disappointed he couldn’t speak for longer. He said the committee had “their minds made up” and “didn’t want to hear any input,” adding that it could affect their seats in the next election.

“I thank them for starting down this road for one reason—it’s going to flip Virginia back red in so many ways they don’t expect,” Culpeper County Sheriff Scott Jenkins told The Epoch Times. “Elections have consequences.”

Jenkins said the strong push for tighter gun control has “awakened a population in the state that has long been quiet.”

“And that doesn’t account for the court battles that are coming, because there are plenty of us willing to battle this out in the court the right way, as well,” he added.

Jenkins has gone further than others, saying he would “deputize citizens” as auxiliary deputies, if needed, to protect the constitutional right to bear firearms. In early December, Culpeper County’s Board of Supervisors voted 7 to 0 to affirm itself as a “constitutional county,” prompting a standing ovation by residents who were present for the vote.

Northam and other Democratic lawmakers in the state, meanwhile, have credited their focus on gun control for helping them win full control of the General Assembly for the first time in more than two decades, according to The Associated Press.

Virginia, especially, has become the center of the gun debate, with 91 of the state’s 95 counties passing some sort of measure affirming their support for Second Amendment rights. A number of municipalities in Virginia have also become sanctuaries.

Hundreds of local counties, cities, and towns across America are declaring themselves “Second Amendment sanctuaries” or “constitutional counties” as part of an expanding movement over the past few years. In Illinois, at least 70 of the 102 counties in the state have passed some form of sanctuary resolution.

Paul Moog, who works with the Virginia Citizens Defense League, a nonprofit grassroots organization whose goal is to advance the rights of Virginians to keep and bear arms, said he was very much in favor of the Second Amendment sanctuary movement.

“[We] helped put them in through Orange County,” he said. “I’ve been to several other meetings, and I think it’s a great movement that will help defuse some of the tension.”

The Second Amendment to the U.S. Constitution was passed by Congress on Sept. 25, 1789, and was ratified on Dec. 15, 1791. The text reads that “a well regulated Militia, being necessary to the security of a free State, the right of the people to keep and bear Arms, shall not be infringed.”

Moog claims that the proposed gun control agenda could cause a bigger fight to break out within the state.

“I think that the Democrats are very close to pushing civil war in Virginia,” Moog said. “If you try to turn your opposition into criminals, people have a tendency to want to fight back.”

The sanctuary movement is helping to take the heat off the anger people are feeling, because it’s making them “feel more secure” according to Moog. “I think we’re in a very touchy situation,” he said.

In a sign of tensions boiling over, Marsden last week called Second Amendment supporters “little kids” who should be ignored, according to a news post by the Fairfax County Republican Committee.

In an interview with radio station WMAL, co-host Mary Walter read from an email that Marsden had reportedly written to a constituent, where he had said that “too many of your members and other 2A supporters appear to have mental health issues.”

Marsden later defended his remarks and cited offensive emails and phone calls he claimed he received from some constituents.

In response to the rising number of Second Amendment sanctuaries, a U.S. House Democrat recently floated the idea that Northam could direct the state’s National Guard to help enforce the proposed gun restrictions. Rep. Donald McEachin (D-Va.) made the proposal on Dec. 11, 2019, while also suggesting cutting off state funds to counties that don’t comply with gun control measures that might pass in the state.

The Virginia National Guard responded with a string of Twitter posts, in which they said they haven’t received any requests from the governor.

“We understand and respect the passion people feel for the U.S. Constitution and 2nd Amendment rights,” Maj. Gen. Timothy P. Williams, the state’s adjutant general, wrote. “We will not speculate about the possible use of the Virginia National Guard.”

Miles away from the state capital, a local gun store owner said that the constitution protects the people.

“Our constitution protects us … But the people that want control understand that they can’t get control as long as the population can protect themselves,” Tony Martin, the managing partner of a local gun store, said.

“That’s the point of the Second Amendment—to be able to serve the people and not be oppressed by the government,” he added. “In Virginia, they want to change it completely.”

Red flag laws and other gun control proposals infringe upon the rights of the citizens, Martin said. He said the United States judicial system is based on the principle that everyone is innocent until proven guilty and that, in a court of law, people are entitled to a fair and reasonable opportunity to defend themselves.

Martin said that the red flag law approach appears on the surface as if it should make everyone safer, but, on closer examination, exposes serious issues. In particular, it would forgo the “innocent until proven guilty” principle.

“This is an incremental process. You can’t just come in and say, ‘Oh, here’s the Constitution, let’s shred it and start over.’ They can’t do that, so they are taking baby steps and they have done so for many, many years.”

Martin noted that the “firearms industry is the most heavily regulated industry in the world.” He said he also objects to the term “gun violence,” saying that the gun itself isn’t capable of committing any crimes.

“It’s an inanimate object,” he said. “Now, could it be used violently by a person? Of course. And for that matter, anything could.”