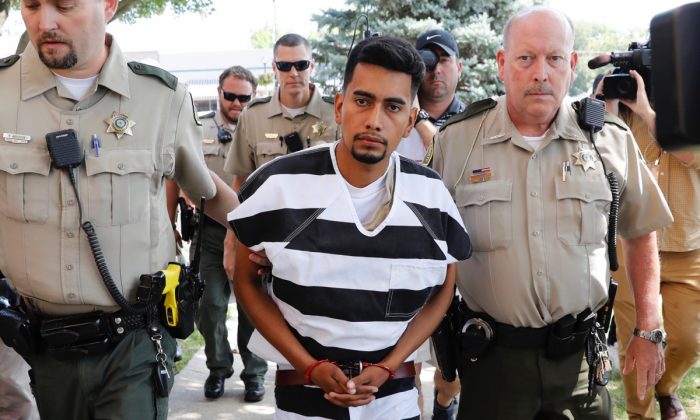 Lawyers for illegal alien Cristhian Bahena Rivera claim that his constitutional rights were violated by Iowa law enforcement officials during an interrogation on the alleged murder of 20-year-old college student Mollie Tibbetts.

In an additional document filed last Thursday by Rivera’s lawyers, Chad and Jennifer Frese, they argue that their client’s constitutional rights were violated. Their claim in this recent filing is that Rivera was not told of his right to contact the Mexican Consulate before speaking to law enforcement.

“Providing this information to Bahena—a confused, exhausted and vulnerable Mexican national was seeking trustworthy help—would have triggered an invocation of consular notification and a decision to await the consulate’s assistance before making any other statements,” the document read, reported the Des Moines Register.

Rivera, 24, was charged with first-degree murder in the stabbing death of Tibbetts after he led officials to a cornfield where her body was hidden. He confessed to kidnapping Tibbetts on July 18, 2018, while she was on a run near her hometown of Brooklyn, Iowa.

Rivera is an illegal immigrant who lived and worked outside of Brooklyn, Iowa. He obtained employment at Yarrabee Farms as a farmhand, using a suspected fake ID and social security card, reported by AP news.

In the initial 29-page motion filed by Rivera’s lawyers in March, they stated that Rivera was not told of his right to a lawyer and his right to decline the interview until a lawyer was present until well into his 12-hour interview with law enforcement. Thus, they argue that any confession by Rivera was not made freely and should be dismissed as evidence.

The “Miranda warning” refers to the constitutional requirement that once a suspect is in taken into custody by law enforcement they are immediately read their rights.

According to Cornell University, “The requirement to give Miranda warnings came from the Supreme Court decision, Miranda v. Arizona, 384 US 436 (1966). In Miranda, the Court held that a defendant cannot be questioned by police in the context of a custodial interrogation until the defendant is made aware of the right to remain silent, the right to consult with an attorney and have the attorney present during questioning, and the right to have an attorney appointed if indigent.”

“Without a Miranda warning or a valid waiver of the Miranda rights, statements made may be inadmissible at trial under the exclusionary rule, which prevents a party from using evidence at trial which had been gathered in violation of the United States Constitution.”

A hearing is scheduled for Aug. 23, at which time the lawyers’ argument for dismissal of evidence will be heard. If at that time a judge determines their motion is valid, some evidence, including Rivera’s confession, could be thrown out.

Although illegal immigrants’ basic rights to due process are protected by the constitution, there are some who think it has been taken too far. Secure America Alliance sent more than 200 postcards to the judge in charge of Rivera’s case, Joel Yates, protesting taxpayer money going into Rivera’s defense, telling Yates not to, “award any more taxpayer money for a deluxe legal defense for an illegal alien,” AP reported.

Rivera is being held on $5 million bond while awaiting the November trial on the first-degree murder charge, which if found of guilty carries a sentence of life in prison. If acquitted, he could face deportation because the federal government has filed an immigration detainer against him.