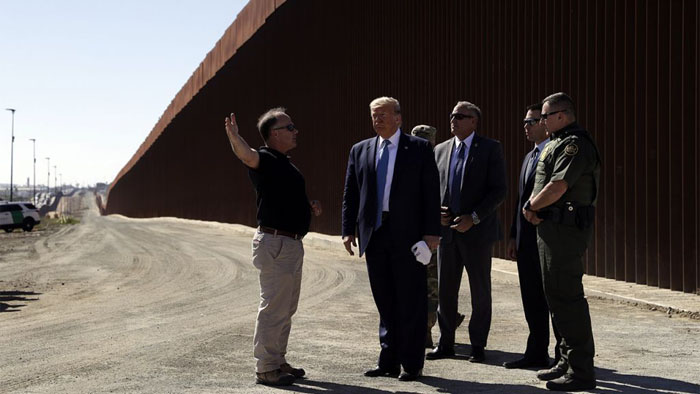 Construction of a private section of border wall in Mission, Texas, is continuing despite a district judge’s Tuesday decision to temporarily block the work, The Guardian reported Saturday.

The expected 3.5-mile-long private section of border wall is being funded by We Build the Wall, a nonprofit organization founded by U.S. Air Force Veteran and Purple Heart recipient Brian Kolfage that has raised more than $25 million since its start in December 2018.

Workers were moving soil, digging trenches and positioning the physical wall on Thursday and Friday after Vasquez’s ruling, in which he says the construction will cause “imminent and irreparable damage” to the 100-acre National Butterfly Center, a museum adjacent to the wall, according to The Guardian.

“The defendants’ conduct has demonstrated irreparable harm to [the Butterfly Center] since defendants have committed willfully, maliciously and with an actual and subjective intent to commit great harm to plaintiff,” Vasquez wrote, according to the Times.

Kolfage, a triple amputee, tweeted on Saturday, “A little adversity makes the victory all that much more sweet. We won’t stop fighting to stop women and children from being enslaved by cartels.”

He said Vasquez’s ruling looked like “it was written by a first-year law student” in a Wednesday interview, according to the Times. “It’s just these butterfly people want to try to flex their muscle a bit.”

Kolfage posted a video to Twitter after the ruling in which a man he calls “foreman Mike” confirms that workers are trying to have the wall completed by Jan. 15.

“We’re going to be putting this up,” he says in the video. “We have to supercharge it now. It’s time to get really moving. … We’re planning to have this done by Jan. 15.”

Foreman MIKE with a huge announcement just now! WE ARE GETTING IT BUILT! Border agents said “anyone trying to stop us is probably benefiting from the cartels”. @TrumpStudents @DeplorableChoir @fleccas @FogCityMidge @DailyMail @JackPosobiec @RyanAFournier @KatTimpf1,7756:58 PM – Dec 3, 2019

“These people appear to be so lawless that it doesn’t have an effect on them,” he said, adding, “It’s already been destructive. … I think they’re all looking for publicity and money. None of it is political on our part.”

We Build the Wall’s website states that if every Trump voter donated $80 to the organization, there would be enough money to complete construction for the entire border wall.

We Build the Wall did not respond to FOX Business’ request for comment.