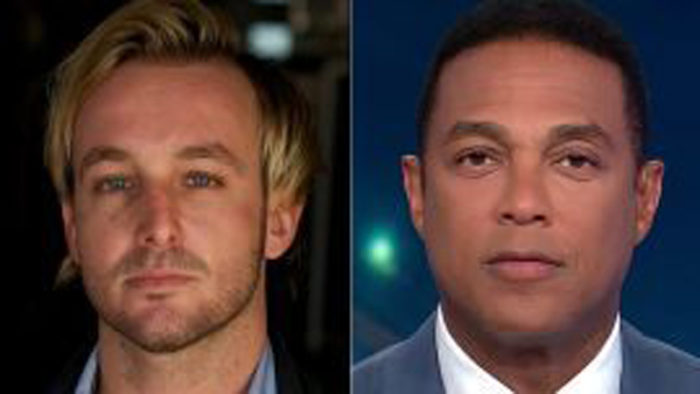 The former boss of a bartender who earlier this week filed an explosive lawsuit against CNN host Don Lemon, accusing the newsman of a strange, sexually charged assault, told Fox News he witnessed the incident and corroborated his one-time employee’s claim.

In an exclusive interview, George Gounelas, who managed Dustin Hice at the Old Stove Pub in July of 2018, detailed what allegedly occurred on the night of the bizarre encounter at Murf’s Backstreet Tavern, which is located in the prestigious Hamptons area east of New York City. Gounelas is named in the suit filed by Hice.

“Dustin worked for me as a bartender [and] we went out after work one night. We were standing there and he said, ‘Hey, that’s Don Lemon,’” Gounelas said. “Murf’s is a place you go to drink after you’ve been out drinking. We had just gotten off of work. So that’s why we ended up there, because we worked in the restaurant business. So by the time everything is done, we can only hit a late-night spot.”

CNN HAS BAD WEEK AMID APRIL RYAN, CHRIS CUOMO AND DON LEMON NEWS: ‘IT WAS QUITE EMBARRASSING’

Hice approached Lemon to strike up a conversation but the newsman declined, according to Gounelas, who said he and Hice then offered to buy Lemon a drink, which the CNN host also declined.

Gounelas said that a few moments later, Lemon came up to them.

Dustin Hice says CNN host Don Lemon assaulted him during the summer of 2018.

“Don Lemon has now come around the corner and is standing face to face with us. There is a beam, a pole, in the place. Don’s standing up against the pole, face to face with Dustin, I turn around and I’m standing right there between the two of them,” Gounelas said. “He’s saying, ‘So you like me? Is that why you’re bothering me?’”

Hice responded, “Nah, man, I just wanted to say, ‘What’s up?’” according to Gounelas.

Gounelas told Fox News he couldn’t recall what Lemon said verbatim, but it was “along the lines of, ‘Do you like me? Is that why you’re bothering me, because you wanna f— me?’”

Gounelas said Lemon appeared “pretty drunk” when he confronted the duo at the wee-hours watering hole.

“He put his hands down his pants, inside his board shorts, grabbed his [genitals], and then came out with two fingers and, like, clipped Dustin’s nose up and down with two fingers asking ‘do you like p—- or d—?’” Gounelas said.

Gounelas said he laughed during the alleged incident and immediately mocked Hice as “gross” because of Lemon’s alleged actions – but Hice didn’t think it was a laughing matter.

“Dustin was in this shock mode saying, ‘Bro, did that just happen? That was disgusting,’” Gounelas said before explaining that he didn’t think it was too unusual at the time. “The whole thing is like, I go out in the Hamptons, I live out here, I have a restaurant, I get it, people get crazy. To me, it was just another thing. To [Dustin], he was like shocked.”

Gounelas said he isn’t sure if Lemon, who is openly gay, was being confrontational or simply flirting.

CNN’S APRIL RYAN AFTER BODYGUARD EJECTS LOCAL JOURNALIST: ‘WHEN I SPEAK, I DON’T HAVE NEWS COVERING MY SPEECH’

“I guess it’s a little of both. If someone had done that to me, I probably would have punched him. But I think it might have been flirting. I think Dustin was more in shock… If someone was flirting with me like that I’d say, ‘alright man I’m not gay,’” Gounelas said. “I wouldn’t go up to a girl like that. It could be his way of flirting.”

Hice continued to work for Gounelas at the now-shuttered Old Stove Pub for the duration of the summer, where his former boss said the bartender was regularly teased about the incident.

“As his boss, I was kind of making fun. I feel bad now,” Gounelas said.

Gounelas told Fox News that the incident allegedly happened in the presence of others and he’s seen Lemon in Murf’s Backstreet Tavern on other occasions.

THIS IS CNN? PRIMETIME SHOWS FILLED WITH LIBERAL OPINION, NOT STRAIGHT NEWS AS NETWORK CLAIMS

“The place was packed. I’m sure other people saw. It was a known thing in the Hamptons, not like this quiet thing. Everybody knew Dustin and what happened to him,” Gounelas said. “Every time we went out, every bartender offered him a Lemon drop shot, making fun of him. He got some sh-t for it.”

Gounelas said Hice was “a little messed up” from the alleged incident.

“This is the only thing he could talk about, not in a good way, like ‘I can’t believe that sh-t happened,’” Gounelas said.

Murf’s Backstreet Tavern is located in Sag Harbor, a part of the Hamptons where New York’s wealthiest residents have multi-million dollar weekend homes. Lemon apparently hosted a star-filled bash at his Sag Harbor home only two months before the alleged incident occurred.

In May 2018, a former aide to Andrew Cuomo, the Democratic Governor of New York and brother of fellow CNN host Chris Cuomo, tweeted — and then deleted – a photo of herself with Lemon and now-disgraced lawyer Michael Avenatti, who was a regular CNN guest at the time.

Don Lemon threw a “Sag Harbor soiree” weeks before he allegedly assaulted Dustin Hice at a Sag Harbor bar, according to Juanita Scarlett.

The former Andrew Cuomo aide, Juanita Scarlett, wrote that she was at “the Sag Harbor soiree” of her “second favorite on-air journalist,” with a photo that included her husband, New York Daily News columnist Errol Louis, CNN contributor Margaret Hoover, Avenatti and Lemon.

Hice’s lawsuit against Lemon, first reported by Mediaite, was filed Aug. 11 in Suffolk County Court. In the suit, Hice also said Lemon’s off-screen demeanor was in stark contrast to the “Me Too” advocate whom he often saw on TV.

“When the cameras are turned off, however, Mr. Lemon’s actions are in stark and disturbing contrast to the public persona he attempts to convey,” the suit reads.

Lemon offered a six-figure settlement before talks broke down and Hice filed the formal complaint, according to a source close to Hice’s attorney.

CNN denied Hice’s account and said Hice seemed to have animosity toward the cable news network.

“The plaintiff in this lawsuit has previously displayed a pattern of contempt for CNN on his social media accounts,” a CNN spokesperson told Fox News in a statement. “This claim follows his unsuccessful threats and demands for an exorbitant amount of money from Don Lemon.

“Don categorically denies these claims and this matter does not merit any further comment at this time,” the CNN spokesperson added.

CNN did not immediately respond to a request for additional comment.

Fox News’ Liam Quinn and Joseph A. Wulfsohn contributed to this report. Brian Flood covers the media for Fox News.