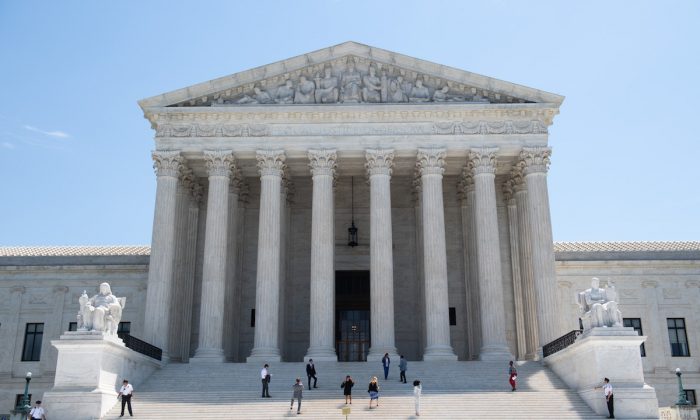 WASHINGTON—The Trump administration told the Supreme Court in a new filing that a rule that the director of the Consumer Financial Protection Bureau can only be fired by the president for cause is unconstitutional.

The Consumer Financial Protection Bureau (CFPB) has been a partisan punching bag for some time.

Many Republicans accuse the financial regulator of overreach and have tried to curb its reach. They say former Director Richard Cordray, a Democrat who left his post in late 2017 to unsuccessfully run for Ohio governor in 2018, published far-reaching regulations and imposed overly harsh penalties on firms for allegedly harming consumers.

Democrats, on the other hand, tend to defend the agency, which was created by the Dodd-Frank Wall Street reform law and began operating in 2012. The agency is said to be the brainchild of Sen. Elizabeth Warren (D-Mass.), who is now seeking the Democratic Party’s 2020 presidential nomination.

CFPB official Leandra English attempted to become acting director of the agency after Cordray’s departure, claiming Cordray named her as acting CFPB director and that President Donald Trump didn’t have the authority to appoint an interim replacement.

The standoff was eventually resolved and Office of Management and Budget Director Mick Mulvaney—who is now also acting White House Chief of Staff—came aboard as acting CFPB director. Mulvaney, critics say, substantially weakened the agency. The current director is Kathy Kraninger, who, unlike English, accepts that Trump has the legal authority to fire her if he chooses.

“The structure of the Bureau, including the for-cause restriction on the removal of its single director, violates the Constitution’s separation of powers,” the brief states.

Specifically, Francisco asked the court to decide whether “12 U.S.C. 5491(c)(3) violates the separation of powers by prohibiting the President from removing the Director of the Consumer Financial Protection Bureau except for ‘inefficiency, neglect of duty, or malfeasance in office.’”

Critics of the CFPB say that the provision in Dodd-Frank that makes the agency’s director fireable by the president solely for cause has unconstitutionally limited the president’s authority over the executive branch that he was elected to lead. Those who run federal agencies are generally considered to serve “at the pleasure of” the sitting president.

A panel of the U.S. Court of Appeals for the District of Columbia Circuit ruled in 2016 that the structure of the CFPB was unconstitutional. The panel said the director of the agency has broad power with little oversight and that the arrangement “represents a gross departure from settled historical practice” of having multi-member commissions at independent agencies as a check on their power.

“The CFPB is the first of its kind and a historical anomaly,” wrote then-Judge Brett Kavanaugh, who is now an associate justice on the Supreme Court. “In short, when measured in terms of unilateral power, the Director of the CFPB is the single most powerful official in the entire U.S. Government, other than the President. Indeed, within his jurisdiction, the Director of the CFPB can be considered even more powerful than the President.”

The full District of Columbia Circuit overturned the ruling in 2018, finding the president could only terminate the employment of the CFPB director for “inefficiency, neglect of duty, or malfeasance.”

At Vox, analyst Ian Millhiser stated that if the Trump administration’s challenge to the CFPB succeeds, there could be broader ramifications for federal governance.

Trump “could gain the power to fire members of the Federal Reserve board who refuse to inject steroids into the economy while Trump is running for reelection,” he wrote.