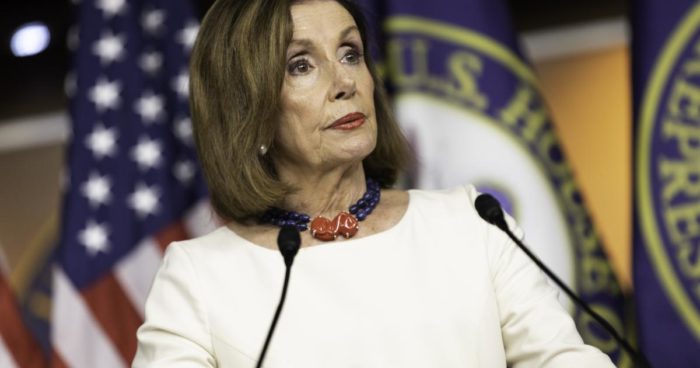 Does an impeachment inquiry require a vote of the full House of Representatives? President Trump and House Minority Leader Kevin McCarthy, R-Calif., maintain that it does. Speaker Nancy Pelosi, D-Calif., claims that it doesn’t.

Pelosi is correct that the Constitution doesn’t explicitly require it. It simply gives the House the “sole Power of Impeachment.” But the gravity of even considering impeachment, fundamental principles of fair and impartial justice, and preserving our republican form of government, do require it.

Pelosi alone announced on Sept. 25 that the House was opening an impeachment inquiry, directing six different committees to investigate the president. This is radically different, and much more partisan, than how this serious step was taken in the past.

LARRY ELDER: IMPEACHMENT IS JUST THE LATEST DEMOCRATIC ATTEMPT TO TAKE OUT TRUMP

In 1974, like today, a Republican was in the White House and Democrats controlled the House. On Feb. 6, the full House voted 410-4 to authorize an impeachment investigation of President Richard Nixon by the Judiciary Committee. Similarly, on Oct. 8, 1998, the full House voted 258-176 for the Judiciary Committee to open an impeachment investigation of President Clinton.

Pelosi’s claim that there is no “House precedent that the whole House vote before proceeding with an impeachment inquiry,” therefore, is simply false.

Other than declaring war, there is no more serious undertaking by the House of Representatives in our constitutional republic. Why? Because through impeachment, the House is charging a president with misconduct so serious that he should immediately be removed from office. In other words, the House is effectively seeking to neutralize the choice – and the votes – of the American electorate.

That is an extraordinary action, especially in a system of government based on the people electing their own leaders. And it’s also the reason that impeachment alone cannot remove the president; that requires conviction by two-thirds of the Senate (67 senators). Neither of the presidents who were impeached — Andrew Johnson in 1868 and Bill Clinton in 1999 — were convicted and, therefore, stayed in office.

An investigation to determine, in the words of the Clinton resolution, “whether sufficient grounds exist” for impeachment should be authorized by the body with the “sole Power of Impeachment” – the House of Representatives. Moreover, such a resolution should, as it did for the Clinton impeachment investigation, outline the rules under which it will be conducted.

McCarthy asked important questions that Pelosi’s announcement did not answer. Will the ranking minority member of the investigating committees have the authority to issue subpoenas and to question witnesses, or simply be ignored by the majority? Will the president’s lawyers be able to attend all hearings and depositions; to present evidence; to object to the admittance of evidence; to cross-examine witnesses; or to recommend witnesses to be interviewed?

As McCarthy says, if Pelosi says “no” to these questions, then she will be “denying the president the bare minimum rights granted to his predecessors.” Doing so would indicate that Pelosi and these committees do not intend to provide the fundamental due process rights we extend even to those accused of wrongdoing in our courts.

All Americans have an interest in the integrity of our government and the legitimacy of its actions. Departing from precedent; single-handed directives; freewheeling roving investigations by multiple committees; and running roughshod over the minority undermine that interest.

On the other hand, that interest is served by the entire House considering and authorizing an impeachment inquiry; a transparent investigation; authority for both the majority and minority committee members to investigate, subpoena, and call witnesses; and outlining the scope of the investigation.

America’s founders did not put impeachment into the Constitution as a partisan tool to be used for overturning an election. How this process is conducted today will reveal who in the House of Representatives agrees with them.

Hans A. von Spakovsky is a senior legal fellow at The Heritage Foundation and the coauthor of “Who’s Counting? How Fraudsters and Bureaucrats Put Your Vote at Risk” and “Obama’s Enforcer: Eric Holder’s Justice Department.” He served as a commissioner on the Federal Election Commission from 2006 to 2007.