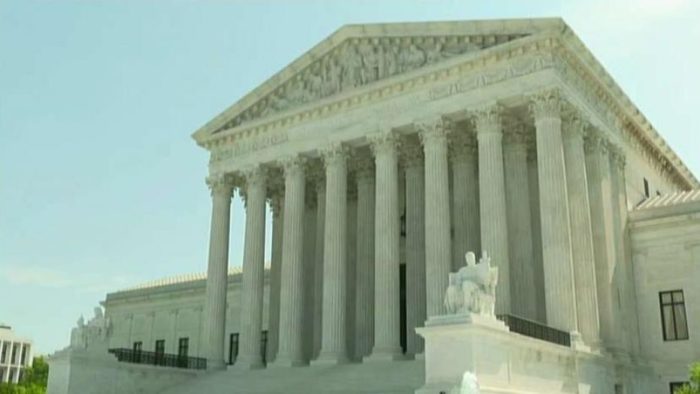 It has become President Trump’s default good-news selling point: his success appointing a record-setting number of judges to the federal bench, including two justices.

Now, as the U.S. Supreme Court prepares to launch its new term Monday, a 5-4 conservative majority could be poised to provide the White House with significant legal and political victories — or setbacks. Such are the unusual dynamics now percolating from the nation’s highest court.

The justices’ election-year agenda includes cases dealing with Trump’s executive power over immigration, along with LGBTQ workplace discrimination, gun rights and abortion regulations. All are teed up to be argued this term, with religious liberty and health-care appeals good bets to be added to the docket. All will likely be decided in a presidential election year.

“The court will be an issue in 2020 but that’s perfectly normal. It was a huge issue in 2016, it helped get President Trump elected,” said Paul Smith, a Georgetown University law professor who has argued 21 cases before the high court. “And it will be so again, precisely because it’s become such an important part of our system.”

It was Trump’s 2016 campaign promise to make judges — and the hot-button issues they decide — a central election issue. He has continued to promote the issue on the stump.

Among the issues to be heard this term by the nine-member court:

— Civil rights protections for LGBTQ workers, and whether employers can be sued for job discrimination.

— Abortion regulations, including a challenge to a Louisiana law restricting who may perform the procedure.

— Immigration and executive power, the most closely watched case on the docket so far. Specifically, efforts by Trump to rescind the DACA program for so-called Dreamers, an Obama-era initiative to shield some young migrants from deportation.

“I know that many of us are very nervous of what’s going to happen when the Supreme Court hears the case,” said Gaby Pacheco, a program director at TheDream.US, which bills itself as the nation’s largest college access and success program for Dreamers. “Hopefully the DACA program lives on to continue and allow these young people to live their lives.”

Despite a string of setbacks by lower courts against administration policies– especially on immigration — court watchers said Trump and his allies have believed the high court’s final say will roll their way.

“They’re playing the long game,” said Thomas Dupree, a longtime appellate attorney and former top Justice Department official. “There are those in the White House and the Justice Department who have made a calculation, saying: we can absorb all these losses in the lower courts because we are going to win the endgame when this case gets into the Supreme Court.”

But, groups opposed to the White House have been busy in the federal courts with a flood of lawsuits, including more than 40 injunctions blocking executive policy enforcement.

“We absolutely take issue with many of the Trump administration’s initiatives on immigrants’ rights, on the border wall, on its effort to overturn Roe vs. Wade,” said David Cole, the ACLU’s national legal director. “So, we’ve been very busy fighting back, but that’s because in our view, the Trump administration has violated constitutional law in so many fields and for the most part, the courts have agreed with us.”

The Supreme Court has jumped in selectively to allow the administration to move ahead with some of its policies, at least temporarily, while the controversies are being litigated. That included a Sept. 11 order allowing the go-ahead for the administration’s proposed ban on immigration asylum for anyone trying to cross the southern border by transiting through a third country, such as Mexico.

Justice Sonia Sotomayor accused the Trump Justice Department of improperly seeking a Supreme Court bailout, and her conservative colleagues for acquiescing too easily.

“Granting a stay pending appeal should be an ‘extraordinary’ act. Unfortunately, it appears the government has treated this exceptional mechanism as a new normal. Historically, the government has made this kind of request rarely; now it does so reflexively,” she wrote in a dissent. “Not long ago, the court resisted the shortcut the government now invites. I regret that my colleagues have not exercised the same restraint here.”

Many progressives have held out hope Chief Justice John Roberts will be a check on the court’s conservative march, at least selectively.

Roberts has earned the president’s displeasure dating back to 2016, when he called the “first among equals” a “disaster” and a “nightmare for conservatives.”

But, the chief justice pushed back publicly last year, after Trump criticized a judge who blocked his asylum policies, calling him an “Obama judge.”

Roberts, in a rare rebuke from a sitting member of the high court, said in a statement: “We do not have Obama judges or Trump judges, Bush judges or Clinton judges. What we have is an extraordinary group of dedicated judges doing their level best to do equal right to those appearing before them. That independent judiciary is something we should all be thankful for.”

This past June, Roberts — siding with the court’s four more liberal justices — was the deciding vote effectively blocking the administration’s plan to include a citizenship question on the 2020 census.

“Certainly, the conservative wing of the Supreme Court, and now with the conservative majority, has been emboldened,” said Elizabeth Wydra, the president of the Constitutional Accountability Center. “The Trump administration seems to think that it has the Supreme Court’s votes in its back pocket. But, when it comes to the Supreme Court’s decision-making, Chief Justice Roberts I’m sure is going to want to have the court not be seen as just a ‘get out of jail free’ card for President Trump whenever lower court judges decide that his policies are unlawful or unconstitutional.”

POLITICS AND THE COURTS

Court watchers said Roberts has had a long-term agenda to keep the high court out of partisan disputes whenever possible, to preserve the bench’s reputation as a fair arbiter.

“What the court’s really trying to avoid is this perception that it votes and it decides cases politically,” Smith said. “And, the chief justice in particular, it’s his role to be a guardian of the legitimacy of the court and to try to find ways to just push back on this idea that the court and the justices are voting their politics — that they’re not really a legal institution.”

It is hard to see how the nine justices would not become a key part of the 2020 election discourse. Besides the high-profile docket, there is much for voters to consider:

— The Kavanaugh confirmation last fall, where the nominee withstood allegations of past sexual misconduct leveled by several women, sparking perhaps the most bitter, hard-fought judicial confirmation.

— Lingering progressive anger over filling the seat of the late Justice Antonin Scalia. Obama’s 2016 choice, Judge Merrick Garland, never received a hearing or floor vote after the GOP Senate majority froze the nomination. After a 14-month vacuum, the Senate approved Trump’s choice of Gorsuch; he and Kavanaugh have proven reliable conservatives in the mold of Justice Clarence Thomas.

— Proposals by some 2020 Democrats to alter the court’s makeup, adding justices and eliminating their life tenure.

This all adds up to a national referendum in which unelected judges likely will be front and center.

“There was a reason people put Trump into office, they wanted to see the kind of judges that were on his Supreme Court list” of possible nominees,” said Carrie Severino, the head of the conservative Judicial Crisis Network, about the GOP nominee’s famous list of possible high court candidates, which included Gorsuch and eventually Kavanaugh. “It’s even more clear now that we have this track record, and the stakes are even higher.”Shannon Bream currently serves as anchor of FOX News Channel’s (FNC) FOX News @ Night with Shannon Bream (weekdays 11PM-12AM/ET). She joined the network in 2007 as a Washington D.C- based correspondent covering the Supreme Court.