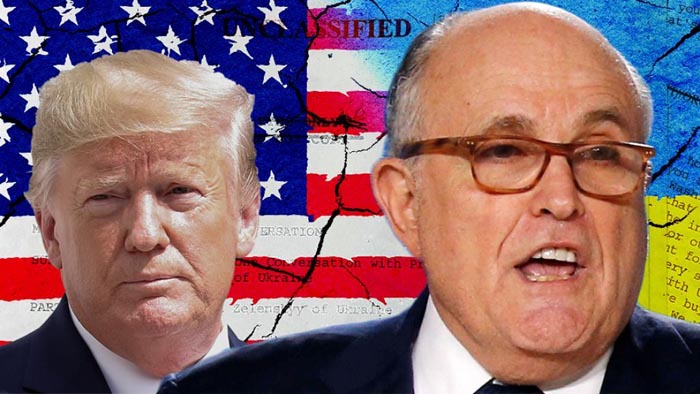 President Trump, in contradiction to previous claims, told Fox News’ Geraldo Rivera Thursday that he sent Rudy Giuliani to Ukraine and he was “not at all” sorry for it.

“Was it strange to send Rudy Giuliani to Ukraine, your personal lawyer? Are you sorry you did that?” Geraldo asked the president in an interview on Fox News Radio affiliate WTAM.

“Not at all,” Trump said, praising Giuliani as a “great crime fighter.”

“Here’s my choice: I deal with the [James] Comeys of the world, or I deal with it another way,” Trump said of using his personal lawyer to fight alleged corruption by a political opponent, former Vice President Joe Biden. He explained he was given a “very bad taste” of the intelligence community, so he turned to Giuliani.

“But also, other presidents had them,” Trump said. “FDR had a lawyer who was practically, you know, totally involved with government. [Dwight D.] Eisenhower had a lawyer, they all had lawyers. Bill Clinton had a lawyer.”

In November 2019, Trump tried to distance himself from his personal attorney’s efforts in Ukraine to urge the government there to open investigations into the Biden family. At the time, the president’s conduct in Ukraine was at the height of its scrutiny as the House carried out its impeachment inquiry.

TRUMP TELLS GERALDO THAT ‘MANY PEOPLE APPLAUDED’ AFTER VINDMAN LEFT

“Well, you have to ask that to Rudy, but Rudy, I don’t, I don’t even know,” Trump had said in an interview with Bill O’Reilly.

“I know he was going to go to Ukraine, and I think he canceled a trip,” the president continued. “But, you know, Rudy has other clients, other than me. I’m one person.”

Trump denied he had ever directed Giuliani to go to Ukraine on his behalf. Trump suggested he did not have firsthand knowledge of Giuliani’s work in Ukraine, but had “heard” of it or “read that someplace.”

“He’s done a lot of work in Ukraine over the years, and I think — I mean that’s what I heard. I might have even read that someplace, but he’s a good man and he’s an honorable guy and he’s a great crime fighter, corruption fighter,” Trump said in the interview, as reported by CBS News.

Multiple figures in the trial, which ended with Trump’s impeachment in the House and subsequent acquittal in the Senate, testified that Giuliani was a central figure in a pressure campaign to secure favors for the Trump administration from the Ukrainian government.

Witnesses alleged that Giuliani met with Ukrainian officials to dig up dirt on Joe and Hunter Biden, the latter having sat on the board of Ukrainian firm Burisma. The Trump administration maintained that Giuliani was rooting out corruption.