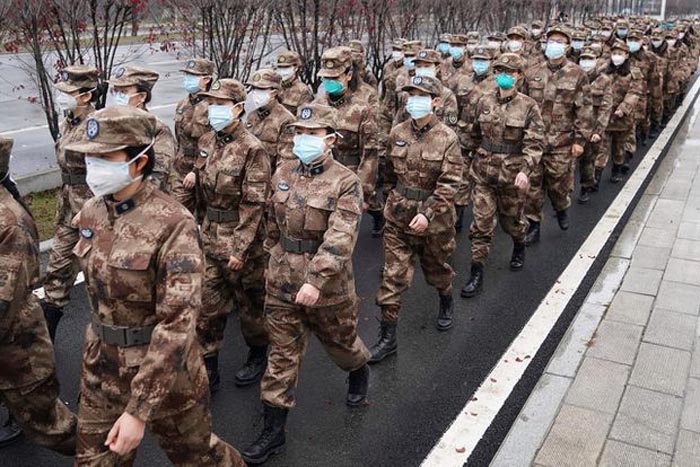 With the “coronavirus” outbreak in the news, and questions swirling if the disease is a Bio-Weapon released accidentally, a well-known speech by Comrade General Chi Haotian, Vice-Chairman Of China’s Military Commission, December, 2005 gives the world insight into the truth. Here are some excerpts to prove that the Chinese openly discussed using biological warfare not only against the US, but on their own people.
(Selected excerpts)

Western countries established colonies all around the world, therefore giving themselves an advantage on the issue of living space. To solve this problem, we must lead the Chinese people into going outside of China, so that they can develop outside of China.

Only countries like the United States, Canada and Australia have the vast land to serve our need for mass colonization. Therefore, solving the ‘issue of America’ is the key to solving all other issues.

First, this makes it possible for us to have many people migrate there and even establish another China under the same leadership of the CCP.  We, the descendants of the Chinese nation, are ENTITLED to the possession of the land! It is historical destiny that China and the United States will come into unavoidable confrontation on a narrow path and fight.

In the long run, the relationship of China and the United States is one of a life-and-death struggle.

There has been rapid development of modern biological technology, and new bio weapons have been invented one after another. Of course we have not been idle; in the past years we have seized the opportunity to master weapons of this kind. We are capable of achieving our purpose of ‘cleaning up’ America all of a sudden.

When Comrade Xiaoping was still with us, the Party Central Committee had the perspicacity to make the right decision not to develop aircraft carrier groups and focused instead on developing lethal weapons that can eliminate mass populations of the enemy country.

Biological weapons are unprecedented in their ruthlessness, but if the Americans do not die then the Chinese have to die. If the Chinese people are strapped to the present land, a total societal collapse is bound to take place.

According to the computations of the author of Yellow Peril, more than half of the Chinese will die, and that figure would be more than 800 million people! Just after the liberation, our yellow land supported nearly 500 million people, while today the official figure of the population is more than 1.3 billion. This yellow land has reached the limit of its capacity. One day, who knows how soon it will come, the great collapse will occur any time and more than half of the population will have to go.

It is indeed brutal to kill one or two hundred million Americans. But that is the only path that will secure a Chinese century, a century in which the CCP leads the world.

We, as revolutionary humanitarians, do not want deaths, But if history confronts us with a choice between deaths of Chinese and those of Americans, we’d have to pick the latter, as, for us, it is more important to safeguard the lives of the Chinese people and the life of our Party.

The last problem I want to talk about is of firmly seizing the preparations for military battle. The central committee believes, as long as we resolve the United States problem at one blow, our domestic problems will all be readily solved.

Therefore, our military battle preparation appears to aim at Taiwan, but in fact is aimed at the United States, and the preparation is far beyond the scope of attacking aircraft carriers or satellites.

Hal Turner Remarks:  It is interesting that here we are, fifteen years later, and China is suffering what has been determined to be the release of a Bio-weapon from its Level-4 Bio-Research Laboratory in Wuhan.

Did they intend to use this on us?

With Shanghai and Beijing both going to FULL MARTIAL LAW today, February 13, is it possible they are still actually preparing to use it against us?  Infecting their own people as a prelude to massive INTENTIONAL release inside the USA?  Call it “an outbreak?”  Make it LOOK like an accident?

There may be much more going on with this “Coronavirus” outbreak, than meets the eye.  Stay vigilant.

What we about to learn is that the Dems have been in bed with the ChiComs. This goes back to the Clinton Administration where they were selling them missle and warhead guidance technology. It was all for sale and pretty much sold or given to them. Whatever tech that was not offered they stole. They are still doing it. Sec of State Pompeo spoke recently of the list of our Governors. He knew who was rated favorably (read traitor) and gave a warning. If you remember the remake of the movie “Red Dawn”, its release was delayed for over a… Read more »