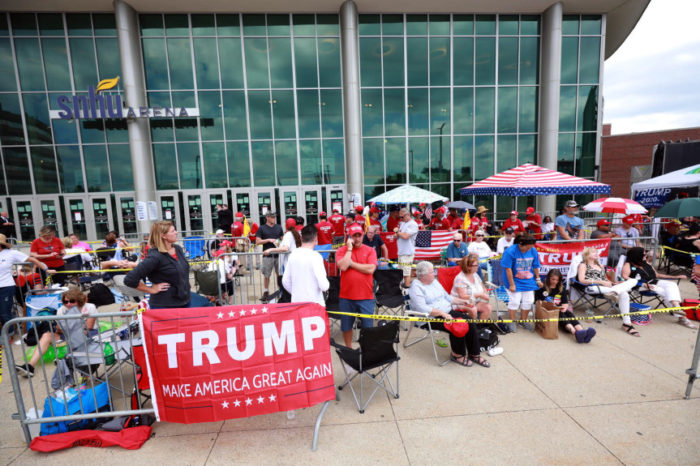 The stage is set in the first-in-the-nation primary state — and key general election swing state — for President Donald Trump to address thousands of his supporters in Manchester tonight, in his first campaign visit since Election Eve, 2016.

The rally at the SNHU Arena marks Trump’s second visit to New Hampshire as president and his first since March 2018, when he held an official event highlighting his efforts to battle the opioid crisis.

The line of supporters from New Hampshire and beyond stretched many blocks down Elm Street ahead of the event, which is drawing national attention, as most Trump rallies do.

The president’s chief campaign spokesman, Tim Murtaugh, told WMUR the intended main focus of Trump’s speech, beginning at about 7 p.m., will be the economy. But it’s well known that Trump often departs from his message and speaks his mind on whatever is on his mind at any time.

Underlying the message is anticipation of whether, and in how much detail, Trump will speak about gun violence in the wake of mass shootings earlier this month in El Paso, Texas, and Dayton, Ohio. Tonight’s rally is his first since those tragic incidents.

The El Paso shooting has drawn special attention because it was committed by an admitted white supremacist – prompting Trump opponents, including Democratic presidential candidates, to claim that Trump bears some measure of responsibility for the attack that killed 22 people.

Gov. Chris Sununu will meet Trump at the airport and attend the rally. Several Republican candidates for the U.S. Senate will be in attendance as the arena as well – retired Brig. Gen. Donald Bolduc, former New Hampshire House Speaker Bill O’Brien and attorney Bryant “Corky” Messner.

But the most attention related to the GOP Senate race for decide a challenger to Sen. Jeanne Shaheen lis being drawn by someone who is not in the race, at least not yet – former Trump campaign manager Corey Lewandowski.

The Windham resident has said he is “very seriously” considering running has told WMUR that if he runs, he would expect to have the support of Trump.

From a policy standpoint, however, the Trump campaign was staying on message ahead of the speech.

Although Trump is known to improvise and speak off the cuff at rallies, campaign communications director Tim Murtaugh said Trump will focus on his campaign theme of “promises made, promises kept.”

“The economy here in New Hampshire is fourth-strongest in the country,” Murtaugh said, noting the state’s unemployment rate of 2.5 percent, “which is amazing.”

The New Hampshire Democratic Party has been hosting a series of vigils this week to speak out against the president.

Murtaugh brushed aside charges by Democrats and other Trump opponents that he incites, or facilitates, racism and divisiveness.

“The president will be here with thousands and thousands of proud Americans because they love this country and they’re happy with the president’s policies. They think he’s doing good things,” Murtaugh said.

“Our policies are making America better, are making the opportunities better, for all Americans.”

Hundreds of people were outside Manchester’s SNHU Arena Thursday ahead of President Donald Trump’s event on Thursday evening.

Up to 11,000 people could attend the rally, and police said they’re ready.

“There will obviously (be) security inside. There will be security outside. We work with our federal partners in situations like this when we have a president coming in,” Manchester Police Chief Carlo Capano said.

Manchester police said most road closures will begin at 2 p.m. Thursday and last for hours. Elm Street between Auburn Street and Lake Avenue was shut down early, at 12:30 p.m., because of safety concerns.

Lake Avenue will be closed from Elm Street to Pine Street, and Chestnut Street will be shut down from Central Street to Auburn Street.

Elm Street from Auburn Street to Valley Street will have limited access for local business traffic only.

Handicapped parking will be available across from the arena on Old Granite Street. No shuttle service will be provided, but city buses will continue to run.

“Obviously, we know it is an inconvenience. They’re going to have to be re-routed and go around. It’s really going to be the area of SNHU center,” Capano said.

Some people have been in line since Tuesday, including Lisa Belanger, who was first in line.

“This may be the only opportunity I’ll ever have to go to a Trump rally and I was not going to miss it,” Belanger said.

Merchandise stands were also in place outside the arena, and enthusiastic supporters were seen early Thursday morning picking up some new gear.

“We agree with everything he is doing,” said Gloria Brewitt, of Epping. “He is one of the first presidents that has done what he said he was going to do, and we hope that he will be here for another four years.”

Some supporters came from outside New Hampshire.

“Even if you are not political, this is a time in American history when you should come to a Trump rally, because there is nothing like it,” said Edward Young, of New Jersey. “It is bigger than the Super Bowl. It’s bigger than game 7 of the World Series. It’s bigger than New Year’s Eve in Times Square. This is it, and it’s a one-man show.”

The New Hampshire Democratic Party has been hosting a series of vigils this week to speak out against the president.

“I think from him you can expect more lies, more broken promises to the Granite State,” Holly Shulman, of the NH Democratic Party, said.

Authorities said any protesters will have a designated location in the immediate area of SNHU Arena.